People will be able to meet in private homes as most of mainland Scotland moves to Level 2, with eased restrictions on hospitality, entertainment, education and sport.

The new rules come into effect on Monday (May 17) and will apply to all mainland Local Authority areas except Moray, which is experiencing a high number of COVID cases. As a result, Moray is likely to remain in Level 3. A final decision on this will be made at the end of this week.

The Western Isles, Orkney, Shetland and remote Highland and Argyll islands are expected to move straight to Level 1 as the virus is sufficiently under control.
Please download the Check in Scotland app if you can to help Test and Protect easily contact people who need to self-isolate.

Funding for Local Government
On April 30, COSLA Leaders agreed to the recommendations of the Settlement and Distribution Group for the following funding streams:

COSLA Leaders also noted an update on the UK Government Community Renewal Fund, Levelling Up Fund and the UK Shared Prosperity Fund. Leaders agreed that allied to the work being pursued by the Presidential team through their regular meetings, COSLA’s Resources Spokesperson, Councillor Gail Macgregor, and COSLA’s Environment and Economy Spokesperson, Councillor Steven Heddle, would seek meetings with relevant UK Government Ministers, to discuss the future relationship between the UK Government and Local Government on these and future funding programmes. Leaders expressed their concerns that the initial criteria for the priority areas was set by the UK Government without consultation with COSLA, meaning that many areas with the greatest needs have not been prioritised and agreed for COSLA Officers to continue to engage in this process, including to make the case for a greater allocation of funding in order to ensure that no community loses out, and feedback key issues to Leaders.

COSLA Funding Tracker – for COVID-specific and policy-related funding
Following Leaders on 30 April and the consideration of £316m for 2021/22, COSLA’s funding tracker has now been updated and shared with all Councils to assist with ongoing monitoring and reporting. The tracker continues to monitor COVID-specific funding, as well as ‘business as usual’ policy related funding. COSLA continues to make the point to Scottish Government that Local Government’s preference would be to include funding within the Settlement, to assist with planning and delivery on the ground.

Enhanced Summer Offer 2021
In April COSLA Leaders agreed that local authorities would deliver a targeted offer of enhanced summer programmes during 2021 for children and young people who have been impacted most over the past year.

The enhanced offer will provide opportunities to socialise, play and reconnect within their local communities and integrate food and wider family support for those in low income families and young people who have been particularly affected by the disruption from the pandemic.

The Scottish Government published guidance for local authorities for the enhanced Summer Programme on May 7.

The guidance can be found here and  includes details on target groups, considerations for delivery and  monitoring.

The phasing of the expansion – which was also considered and agreed by the Children and Young People Board at their April meeting – will be based on four distinct phases:

* Phase One – July 2021 – free school meal holiday support to all children and young people, eligible for free school meals on the basis of low income, in primary and secondary.
* Phase Two – August 2021 – This phase would see the current universal provision to all P1-P3 children expanded to include P4 children.
* Phase Three – January 2022 – Expansion of Universal Free School Meals to P5 children. The timing of this phase would enable some engagement with families to gauge interest in ‘taking up’ the offer and plan changes to timetables, staff resource and food stocks accordingly.
* Phase Four – August 2022 – Expansion of Universal Free School Meals to P6 and P7 children.

COSLA Children and Young People Spokesperson, Councillor Stephen McCabe, will jointly chair a Governance group to oversee the expansion with the incoming Minister for Education.

The Declaration was drafted by Scottish Government together with regional and local authorities and their representative organisations active at international level and is the result of online consultation – the Edinburgh Process – formally mandated by the UN Convention for Biological Diversity to collate Local Government views.

COSLA Leaders also recognised the benefits of integrating nature into local planning, management and governance and the importance of placemaking and place-based approaches.

COSLA signatory is consistent with COSLA’s position on tackling climate change and its impact across our society and environment and commitment to tackling both climate and biodiversity loss and supports our political ask for international agreements to recognise the key role of local governments.

It follows recognition by the COSLA’s Environment and Economy Board of the importance of supporting biodiversity and nature-based solutions as part of actions to achieve a Just Transition to net-zero by 2045 and acts as a precursor to future domestic work including the future Scottish Biodiversity Strategy and upcoming COSLA/IS Elected Members Briefing on nature- based solutions.

Elect Her (formerly The Parliament Project) is running a series of workshops from late May onwards aimed at supporting Women of Colour to explore their next political steps and consider standing in the 2022 local elections.

As part of our Barriers to Elected Office work, COSLA is hosting an online Councillor roundtable session with Elect Her on Thursday, May 20 13:00-13:45.  This event is aimed at Councillors who want to find out more about the upcoming workshops and how they can promote and support this work within their local communities.
Please register via Eventbrite.

Information and support related to mental health and wellbeing can also be found on Clear Your Head and NHS Inform. 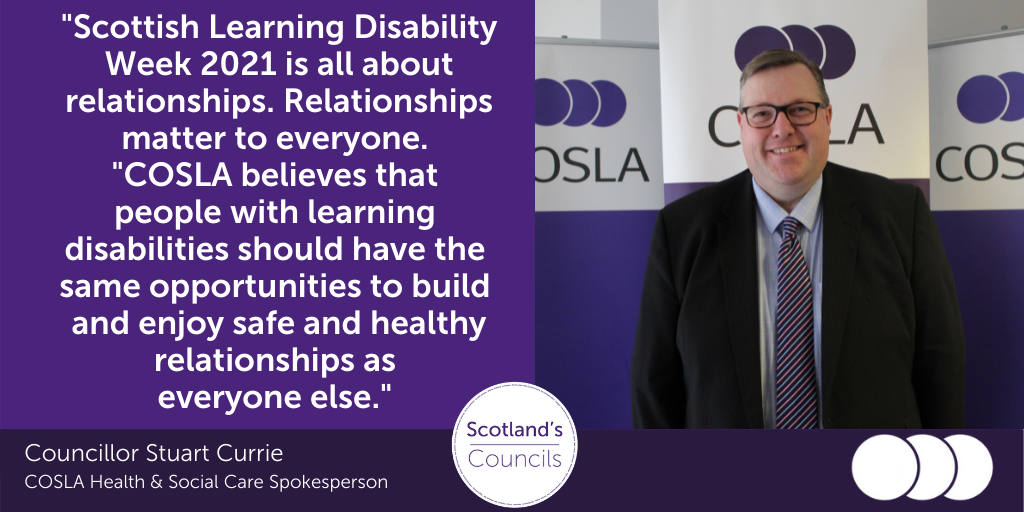 A full list of constituency and regional MSPs, including contact details, can be found here - Current Members of the Scottish Parliament (MSPs).

Environment & Economy Board
The Environment and Economy Board met on April 23 and, as part of the agenda, discussed four items related to the Just Transition to a Net Zero Economy.

The Board started with a discussion on the final report of the Just Transition Commission which was published on March 23. The paper allowed the Board to discuss Local Government’s role in delivering a Just Transition and what this would mean for the COSLA’s future work.

The Board went on to discuss preparations for the COP 26 climate change summit in Glasgow in November and debated COSLA’s position on transport infrastructure and the role of the car in transport policy.

The Board ended this section of the agenda with a discussion on how Local Government can assist the decarbonisation of heating in homes and public buildings and agreed COSLA’s response to the Scottish Government’s Heat in Buildings Strategy consultation.

Tackling violence against women and girls: what about the men?
Briefing for elected members and other stakeholders by the Improvement Service and COSLA

This briefing is one in a series raising awareness of the causes and consequences of violence against women and girls (VAWG), and highlighting through best practice examples, how it is being tackled across local communities.

It was shaped and informed by local Violence Against Women Partnerships and elected members at a participative workshop hosted by COSLA’s Vice President, Councillor Graham Houston, in November 2020.

It aims to highlight, explore, and identify:

* the inequality of outcomes that both men and women may experience as a result of their gender
* what good practice looks like to ensure support services are available for both male victims of domestic abuse and perpetrators of abuse
* the role that men can play in preventing and challenging VAW
* actions that can be taken to help drive forward improved outcomes for both men and women.

PDFs are published fortnightly and can be viewed online or downloaded and printed off for those who are not online.

The latest PDF looks at doorstep scams, which are likely to increase during the summer months. Throughout May, TSS will be highlighting issues with rogue traders on their social media channels as part of the annual Shut out Scammers campaign, run in partnership with Police Scotland. 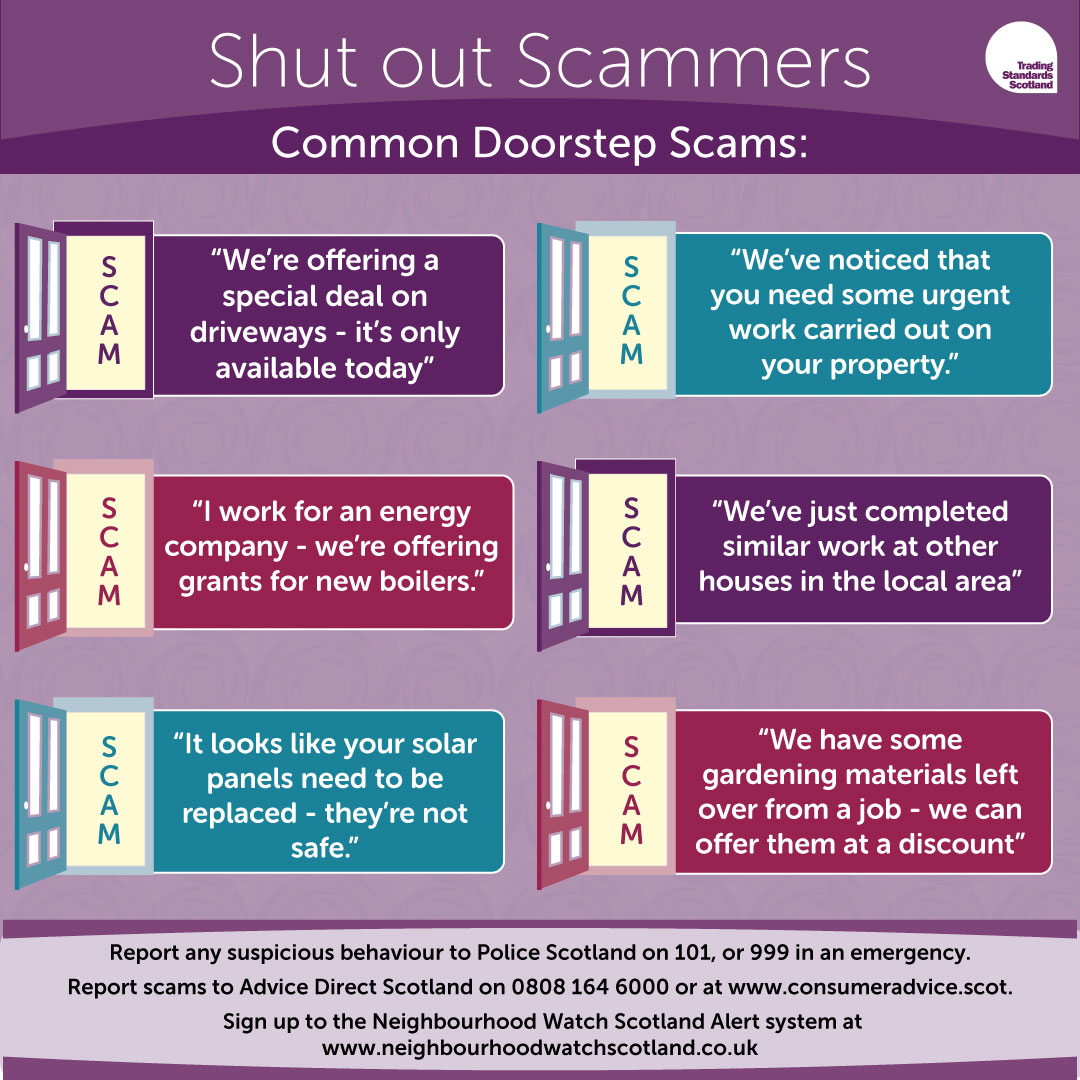 Business Gateway
After months of planning, Business Gateway’s new Planning to Start tool will be launched in a few weeks. The new tool builds on the current Planning to Start tool functionality and will be easy to use from both a client and adviser perspective. The tool gives clients an immediate toolkit of guides, tips, advice, events and information specific to what they need and makes it easy for advisers to then build a tailored action plan to help that client, as well as giving a complete picture of what that client has been served by way of online resources. This flagship service will become a fantastic new entry point into Business Gateway, for anyone thinking about starting a business.

The link to the new tool will be included in a forthcoming EMB as soon as it’s live.

Fact Friday
COSLA has been running a ‘Fact Friday’ social media campaign to highlight the varied range of services provided by Local Government in Scotland.

A series of animated graphics have been produced and will be shared each Friday via our Twitter and Facebook accounts. 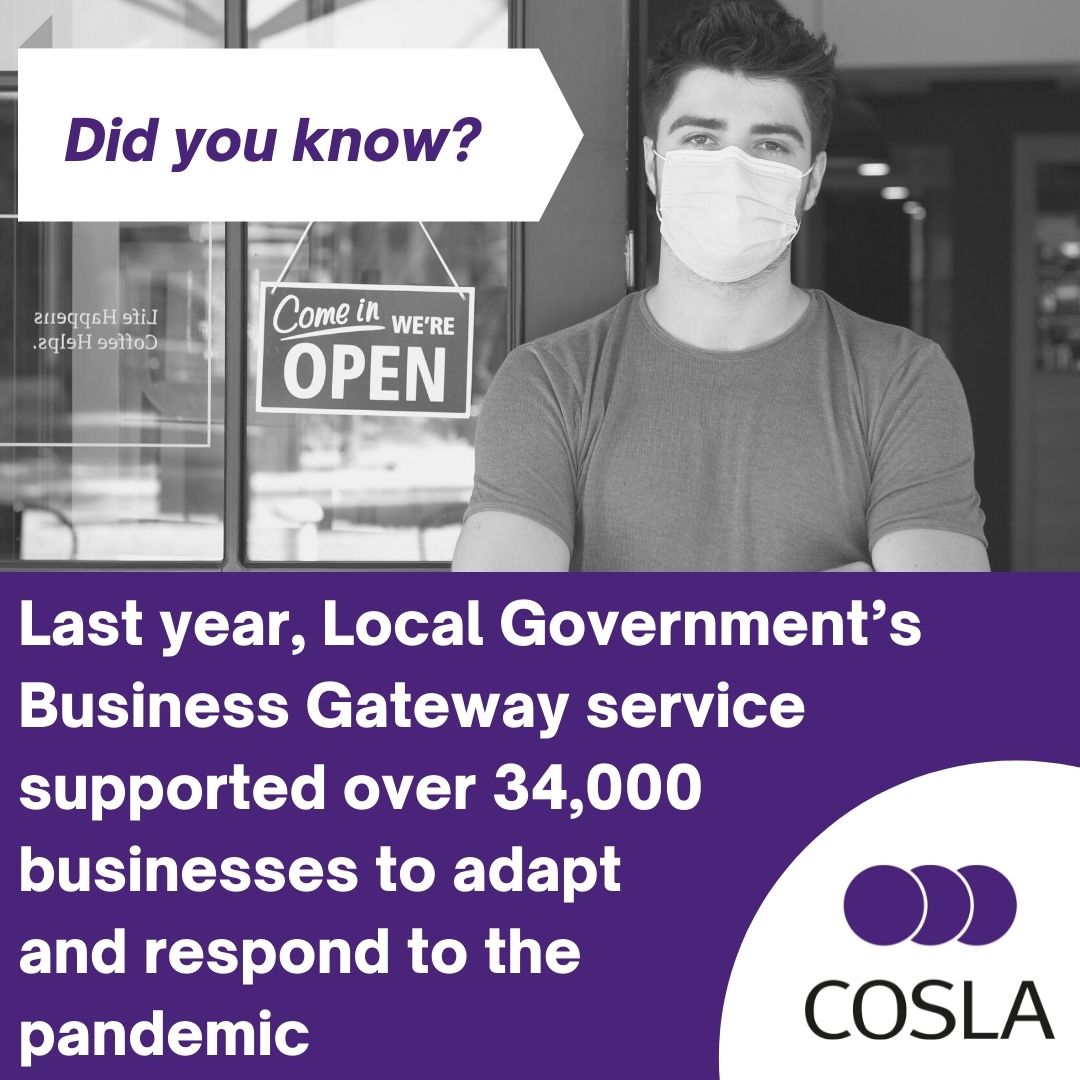 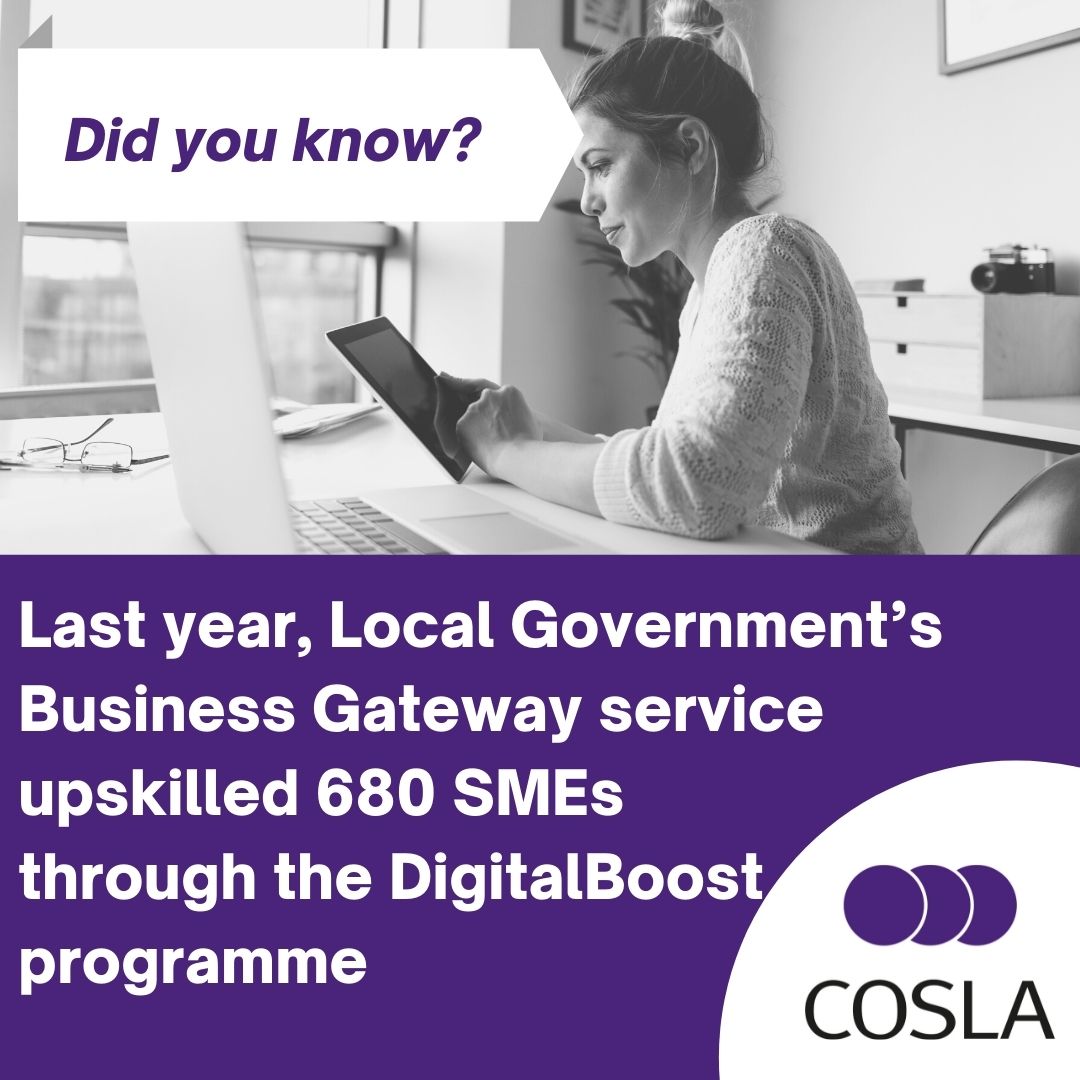